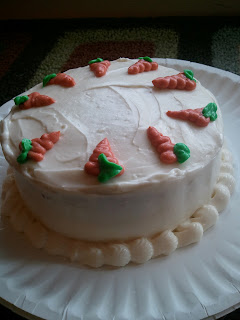 I really need to find more excuses to bake for people because as much as I love making desserts, I really can’t afford to be eating three dozen cookies, a double-layer cake or an entire pie every few days. So, when birthdays, anniversaries, baby showers, bridal showers, a good dentist check-up, or any other event calling for celebration rolls around, I always want to make a dessert.
Carrot cake is a favorite of mine, but I get a little wary when making it for other people. There are so many ideas of what carrot cake is – anything from a spice cake with grated carrots and (maybe) walnuts, to cakes with spice, carrots, coconut, crushed pineapple and raisins. The only thing really tying these two cakes together is the cream cheese icing, which even that can have white chocolate thrown into the mix.
Because this was for a friend’s birthday, I made sure to ask which type of carrot cake the recipient would prefer. Being told he was more of a ‘purist,’ I knew exactly which recipe I wanted to try.

As much as I love the traditional (to my family) carrot cake with crushed pineapple, walnuts and coconut flakes, I found this cake to be truly special in how moist and tender it was, without the distraction of all the other ingredients. The spice came through beautifully with the cocoa powder being a nice addition, and the slight tang of the cream cheese icing cut the sweetness of the cake as a whole.
The best part of this cake? It’s a mini! 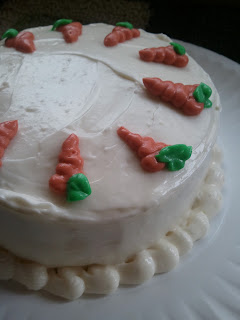 First, nothing to me says “birthday” like a layer cake. Cupcakes are cute, and I love them, but I always look forward to being able to cut whatever sized slice I wanted out of a cake. Even if it’s the same amount of cake as four cupcakes, I don’t feel nearly as guilty for eating one ginormous slice of cake as I would eating four cupcakes.
Second, they’re cute.
Last, I don’t know why, but part of my enjoyment of carrot cake is the way the cake is layered with the icing. I will never say no to a carrot cake cupcake, but I much prefer the ratio of icing to cake in each bite of a slice of cake, versus a cupcake. But it’s only carrot cake so far that I’m this picky about. Weird. Maybe it’s because I can never take a normal bit of a cupcake without wearing half of the icing on my nose or upper lip.
Alas, I digress. Back to mini cakes and veering away from my lack of ability to eat a cupcake like a normal person… 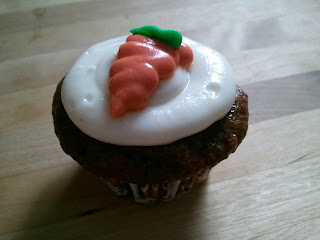 I made two mini cakes by filling some small stoneware dishes with the batter. The approximately six-inch diameter mini-cakes are much more manageable to transport and will easily feed the amount of people attending at the birthday dinner. And, seriously, how cute are these?? One of the cakes was four layers tall, the other was two (that was a thank-you to my in-laws for puppy sitting for us this past weekend!)
With the rest of the batter I did make cupcakes so that I could take them into work and not be tempted by them sitting on my dining room table. Unfortunately, I still have yet to master the art of transporting them. The trek from my house to the train to the city had a net casualty count of six cupcakes. At least they still taste great! 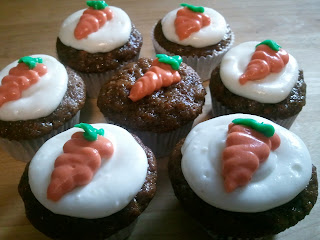 Because I am not sure how the copyright issue works with this recipe, from Rose Levy Beranbaum’s book entited “Rose’s Heavenly Cakes,” I will direct you to where I found a copy of this recipe, which is here.
Link to Carrot Cake Recipe
I followed the cake recipe exactly, and it was absolutely amazing. Perfectly moist and that hint of cocoa did amazing things for the taste of the cake. For the frosting, I omitted the sour cream and white chocolate, favoring the powdered sugar version. I did add about 1/4 c to 1/2 c more sugar than the recipe called for because I wanted the icing to be a little stiffer for decorating. 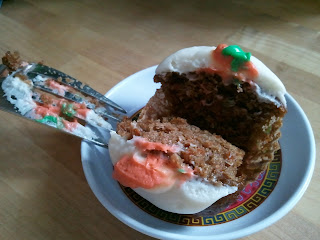 (This would also be perfect if you haven't decided on that special dessert for Valetine's Day! It's not far off now!)

Baked and Blogged with Love by Caroline at 1:40 PM

Awesome carrot cake!! I've never tried any of those alternative cakes you mentioned.

I like the grated carrots, and walnuts...maybe I am a purist as well.

Since you are on this desert kick, why not try making doughnuts?

This looks yummy! I've always loved carrot cakes. :) I don't have much luck, though, with round layered cakes, so I just stick with the cupcakes. :)

Your little icing carrots are so cute. Carrot cake sounds like a delicious idea for dessert. I hope you'll come by and link this up to Sweets for a Saturday #3.

This sounds and looks delicious. The little carrot decorations are the perfect finishing touch.

Karl, I'm pretty sure I'm a purist now, too. Sure I love the 'kitchen sink' carrot cakes, but this one is just a really good cake with no gimmicks. (Donuts are definitely in the near future, I've had a craving for them lately!)

Anna, the layered cakes have taken practice. Slowly but surely I'm seeing a slight improvement in my technique - though I'm still SUPER picky of the finished cake, I see all my little flaws and imperfections!

Lisa, thanks! It was fun linking this up again! The carrots were so fun to make, though my poor husband had to deal with me coming over to him with icing on parchment paper asking 'which looks the most like a carrot to you?'

Michelle, I have always wanted to make a carrot cake with the little carrots - I couldn't be more pleased with how they turned out on the cake!