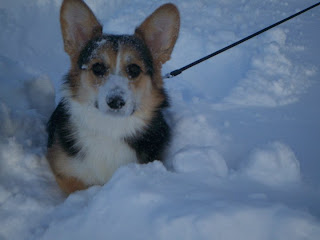 I thought it would be fun to (now that we're mostly dug out!) To show you what we got hit with last week during the third biggest snowstorm in Chicago's recorded history.


O'Hare airport recorded 20.2" of snow, and we had wind gusts up to 60 miles per hour, making visibility practically nothing, and creating massive snowdrifts like I have never seen.


Streets were closed, trains were stopped, the city practically stood still for two days. Cars were abandoned on Lake Shore Drive. It was absolutely unbelievable. Have you seen Thundersnow? A thunder/lightning storm within a snowstorm. Scary, yet incredible.


I will admit, as crippling as the storm was, it was exciting to finally be a part of Chicago's history. I can now say that I was in the Blizzard of 2011, which is in Chicago's record books. I feel a little more like a true Chicagoan now!


We got up Wednesday morning at our normal time (5 am - ugh!) just to make sure things were not blown out of proportion and to check if it was really possible to get to work or not. After looking out the bedroom window, we decided it would be best just to stay home, and the hubby and I went back to sleep. I was still feeling a little guilty, thinking that it really didn't look that bad from the window, and maybe I could have made it to work.


My guilt quickly passed, though. When I woke up around 730-8am, I decided to finally take a look outside and really see what we were dealing with. I opened my front door, and was greeted with snow, inside the house! 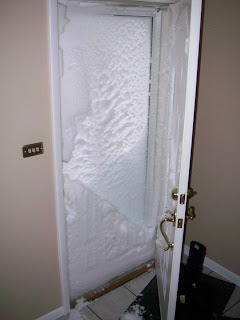 Our storm door apparently blew open sometime during the night courtesy of our wind gusts and snow drifted inside our house, making opening our door impossible.


Our back door and deck were in even worse shape, so our only choice was to exit our house through the garage. The hubby and I stood inside the garage and pressed the button to open the door, not knowing what we'd find.


We both gasped when we saw the gigantic snow drift that had amassed in front of our garage. 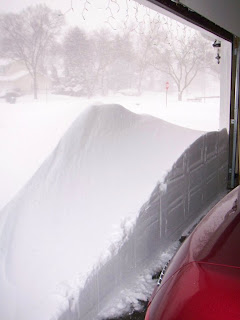 We finally got outside the house, and I couldn't help running around and snapping pictures. I must have said 'This is absolutely insane' about half a dozen times. I couldn't believe it. You can barely see the cars in our garage! 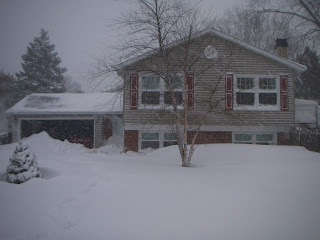 At least now I can see why we couldn't get out the door. The snow had drifted nearly half of the way up the outside of the door - not to mention our little 'snow present' inside the house! 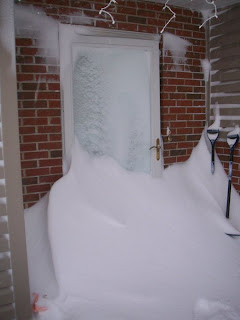 And, like a little kid, I couldn't help myself, I had to run around and see just how deep it was. My legs are totally gone. (And then my boot got stuck, making it nearly impossible to get out of the pile!) 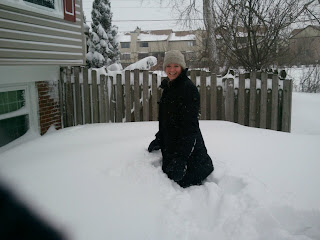 Our poor dog had to wait for us to shovel at least a small path for him to get outside, and even that didn't help. It was snowing and blowing so hard, he could barely see, much less stand up to do his business.
He had quite enough of the snow - granted we were pretty much throwing him in the snow drifts and saying 'have fun!' we knew better than to go in there! But once I got in there with him, he had a good old time. He followed me around, and ran through my boot tracks. 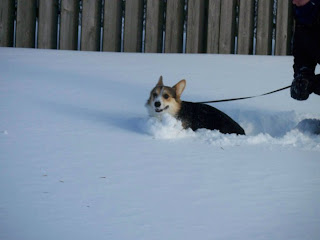 I think he really enjoyed having someone to play with in the snow, he even posed like a champ for a couple of pictures, but I'm sure he had to have been freezing. 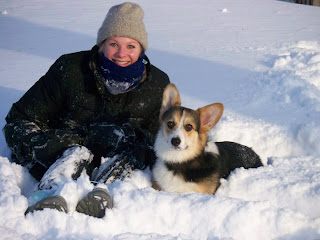 And he found some of the shallower areas of snow that he could see over! But as soon as he found one of those, he'd disappear into a huge snowdrift we didn't see! 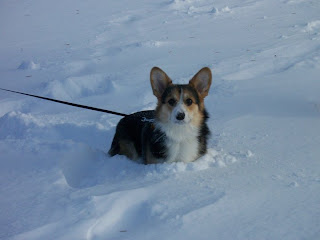 And used me as a 'snow raft' so that he didn't have to run through the snow. Instead he used me to keep him safely above the drifts. 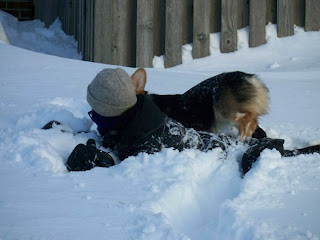 About twenty minutes of playing in the snow, and we were both exhausted. Which is good for Cody, because we had to put him in his crate so that we could start digging ourselves out. 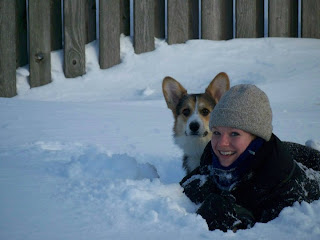 By the time we were finished, it had taken us nearly four hours to clear our driveway and our sidewalks. Cody liked where the snow blower had gone, because the snow compacted enough to support his weight - I think this is the tallest he's ever been (and the snow is taller than he is!) 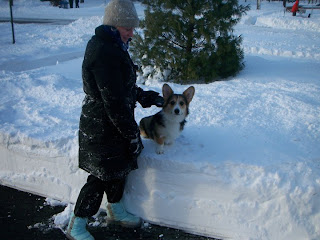 If the 20+ inches we got that on February 2nd wasn't bad enough, Saturday February 5th greeted us with about 3 more inches. That accumulation is more Cody's pace, so I had a fun time with him in the morning playing in the fresh snow! 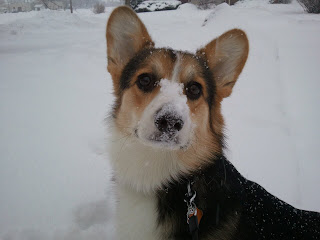 After all the snow and all the effort to dig out, the hubby and I were exahusted (and Cody, too!) But then I looked out the window, and the sunset over the snow was absolutely beautiful. I was so happy I got to see that, because after all that work and all that pain, I was truly reminded how beautiful it all actually is. 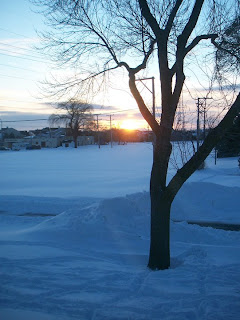 It's been almost a week, and things are finally getting back to normal. Public transportation is mostly back on schedule, the cars have been reclaimed from Lake Shore Drive, and we can finally drive on most of the streets (even if all the lanes aren't open)

Even with all this snow, the hubby and missed only one day of work, and that was only because it was physically impossible to get out of the house.

Ok Puxatawny.. you said it's going to be an early spring. I'm holding you to that.

Or else I'm never trusting another groundhog ever again.
Baked and Blogged with Love by Caroline at 9:03 AM

Unbelievable pictures-I live in MN and never had this much snow! We were spared thank goodness...What kind of dog do you have-that's the cutest dog I've seen!!!

I am still a little in shock about all of it as well! Orgininally being from the East Coast, this would have shut us down for a week. Here, people barely missed a beat, the only thing holding people back was the time needed to dig out of the snow!

Our puppy, Cody, is a Pembroke Welsh Corgi. He's about 8 1/2 months old right now. We love him to death, and his cuteness definitely works to his advantage when he's been, shall we say, less than an angel. :)

Wow! Portland fell apart a couple of years ago with only 6 inches of snow--you guys are pros. I love your little Corgi, he's so cute!

I know it's really mean to be happy it's you and not me, and that's not something I should actually say out loud, even if I'm thinking it. Right? I must say, that's exactly the way things looked in my yard last winter and I'm in no hurry to relive it. My kids, however, have been wishing for a repeat performance all winter!
Stay warm!

Oh my goodness, I can't believe your SNOW! Personally I would be happy if I never had to see the stuff! I can't imagine opening my door to what you had! Well, I've been in a lot of snow, but never been blocked in my house!

Thanks for the comment on the Blueberry cream cheese bars...I'm new at this blogging and didn't realize I had a comment on a post older than 14 days to take out of moderation! And what are you holding that looks like a lobster??? or crayfish?

Evil Cake Lady, I used to be from Baltimore, so I know how it can be in areas that shut down with even the threat of snow, much less a couple of inches. I couldn't believe how many people here are just like "yeah, this is crazy, but it's just snow, we'll deal - not like it's the end of the world!" We think Cody is adorable, and loved watching him run in the snow that is deeper than him. He didn't really seem to appreciate it as much as us!

OneOrdinaryDay, I know how you feel. Last year when we were in Thailand, my family got nailed with some major winter weather. I kept teasing them saying "you think Chicago is so bad and you're the ones that got all the snow! haha" Well, you know what they say about karma... :)

Shelby, I have never seen snow like this. I was so shocked when I opened the door I just started laughing. I'm glad we had a garage, otherwise we'd be getting outside through a window. I can't imagine living in places where this is a common occurance - once in a blue moon is fine with me!

Baking Ribbons, no problem - those bars look delicious! I'm actually holding a shrimp, of all things! This is from when we were in Thailand, and were treated to a wonderful seafood feast with crabs, fish and shrimp. I love steamed shrimp and could not get over that these shrimp were practically as big as my head! I can't even imagine the cost of getting something that size here! Needless to say, I ate my fill that night!

Oh my goodness, you guys had quite the drifting. We didn't have nearly so much drifting!

First off, I LOVE your pup...how cute is he! I love Corgis.
And oh my, that is some serious, serious snow!

Lorraine @ Not Quite Nigella said...

Wow look at that snow! I've never seen that much snow in my life and I would have done the same and just run around taking photos! :)

Heather, the drifting killed us. I mean, I've seen a lot of snow before, but when the drifts end up coming inside your house, you know you're in for a long clean-up!

Peabody, I have been smitten with corgis for the longest time. A lot of people think they're some kind of mix-breed between a dachshund and something else, so it's great to see that there is someone else who knows and loves the corgi! The only good thing about the snow is that when you have nowhere to go and a pantry full of flour, sugar, and chocolate, you get busy!

Lorraine, I'm pretty sure while I was taking the pictures the hubby was just waiting for me to help clear the snow, but I just kept telling him to move out of the picture so I could get good shots!

That's a lot of snow! My sister in law sent me some pictures from CT and I think yours rival hers. And Cody is getting so big!

Anna, I'm pretty sure the snow is what I get for teasing my parents the last few years about the snow they've gotten in MD. Thankfully we're getting some warm weather now and I can see the smallest spots of grass starting to peek through! Yay!!

wow, beautiful pictures! I've never seen so much snow in my life! Love the pic where you were "greeted" by the snow at your door!

I'm more amused by the pictures now than I was that morning when I opened my door to that! I'm so glad we have all these pictures because the snow is nearly all gone now!