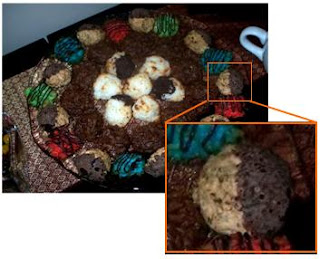 This recipe appealed to me for two main reasons:
The coconut is toasted before incorporating into the recipe
The egg whites are whipped into a meringue-like consistency before using, instead of just mixing everything together.


This one, like the first cookie, required a little more than a wooden spoon to make. While these were good, I’m not sure this is the first recipe I’d run to if I was craving a macaroon. I’d consider these more along the lines of a coconut-flavored meringue instead of a macaroon. But that doesn’t mean that all the coconut lovers in our house didn’t go crazy for them. These were some of the more popular cookies, despite not being a traditional macaroon. You never know if you don’t try.


Up Next: The exciting conlusion to Macaroon Mania! – Part Four: Chewy Chocolate Macaroons

Chocolate Dipped Toasted Coconut Macaroons
From Alton Brown
Ingredients
4 large egg whites
pinch of salt
1/2 cup sugar
12 ounces sweetened shredded coconut, toasted
2 (3 ounce) kosher milk chocolate bars, coarsely chopped
Directions
Preheat oven to 350 degrees F. Place coconut on a baking sheet, spread out evenly and place in the oven.
Return to the oven every five minutes to stir the browning coconut. Once evenly browned, after about 15 minutes, remove the the oven and allow to cool.
In a mixer fitted with a whip attachment. whip egg whites and salt until they become white and begin to stiffen. Add sugar in 3 parts. Continue to whip until the egg whites are very stiff. Fold in toasted coconut.
On parchment lined cookie sheets, drop a teaspoon of the mixture leaving 1 to 2 inches around each cookie. Place into the oven and bake for 15 to 20 minutes. The outside should be golden brown but the insides should still be moist.
Place chocolate chunks in a heatproof bowl. Place bowl over a pan of simmering water so that the bottom of the bowl does not touch the simmering water. Allow to melt. Stir until loose and creamy. Partially dip the macaroons in the chocolate then allow to cool and harden on a parchment lined sheet. You can place the pan of chocolate dipped cookies in the refrigerator to speed up the hardening process.
Baked and Blogged with Love by Caroline at 3:44 PM

Wow, I'm so impressed by your Easter project. You go girl!!

Thanks so much! It seemed like the perfect time to test each type of macaroon!