We interrupt your normally scheduled programming to deliver the following message:

I want to wish everyone a very
Merry Christmas!

May you enjoy the day with good friends, great family and delicious food!

I wish all of you a happy and healthy holiday!

Cody would like to wish you happy holidays as well, and share with you a little poem he penned just for the occasion! 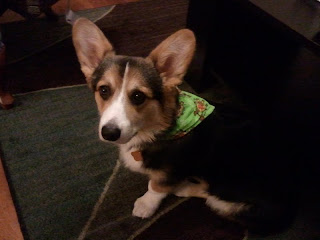 ‘Twas the night before Christmas, when all through the pack
Not a corgi was stirring, not even for snacks; 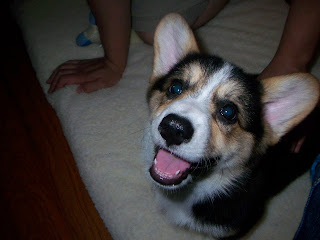 The stockings were hung by the chimney with care,
In hopes that Santy Paws soon would be there;
The humans were nestled all snugly for rest,
And I kept keen watch for our special guest;
I looked and I listened – heard nary a peep,
As my family settled down for a long winter’s sleep, 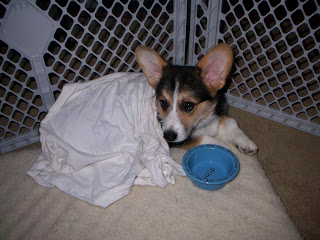 When out on the lawn I heard quite a loud noise,
I barked and I ran to secure all my toys.
I ran to the windows as fast as I could,
To be on the lookout as any good Corgi should!
Then, what to my keen puppy eyes had I spied
But a cart with no wheels and a fat man inside.
On top of the roof was a miniature sleigh
Led by eight corgis with antlers – and super long legs!
There was a little old driver, white fur on his chin,
Was it old Santy Paws? Please, let it be him!
More rapid than beagles his coursers they came,
And he howled, and barked, and called them by name;
“Now, Dasher! now, Dancer! now, Prancer and Vixen!
On, Comet! on Cupid! on, Donder and Blitzen!
To the top of the porch! to the top of the wall!
Now dash away! dash away! Snacks for you all!”
As dry tufts of fur after the wild corgi ran,
When they meet with an obstacle, their flight began 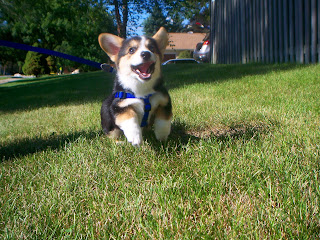 So up to the house-top the coursers they flew,
With the sleigh full of chew toys, and Santy Paws, too.
And then, on the roof I could hear loud and clear,
The prancing and pawing of his tiny reindeer.
As I drew in my head, and was turning around,
Down the chimney Santy had come with a bound.
He was dressed all in fur, from his head to his foot,
And his clothes were all covered with dog hair and soot;
A bundle of rawhides he had flung on his back,
I drooled in anticipation of my tasty snacks.
His eyes — how they twinkled! his dimples how merry!
His cheeks were like kong toys, his nose like a cherry!
In his droll little mouth was on a pipe, puffing,
And I played with his beard as I had Bobo's stuffing; 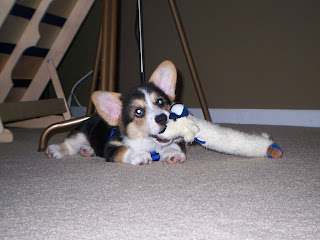 With the stump of a Milk Bone held tight in his teeth,
The crumbs from it I begged for as I eyed from beneath;
He had a broad face and a little round belly,
That shook, when he laughed like a bowl full of jelly.
He was chubby and plump, a right jolly old elf,
And I FRAP-ed when I saw him, in spite of myself;
A wink of an eye and a bone as a bribe,
Was offered as incentive to lure me aside;
He barked not a word, but went straight to his work,
And filled up our stockings; then turned with a jerk,
And laying his finger aside of his snout,
And moved to the chimney to make his way out;
He sprang to his sleigh, to his team gave a yell,
And away they all flew as I barked them "farewell!"
But I heard him exclaim, as he drove out of sight,
“Happy Christmas to all, and be good corgis tonight!” 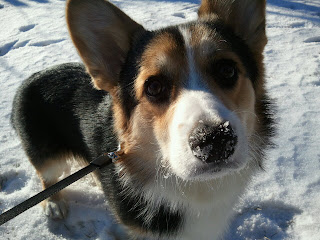 Baked and Blogged with Love by Caroline at 12:21 AM

Email ThisBlogThis!Share to TwitterShare to FacebookShare to Pinterest
Labels: cody

Love it! So clever. Merry Christmas!

Thank you! Merry Christmas to you!